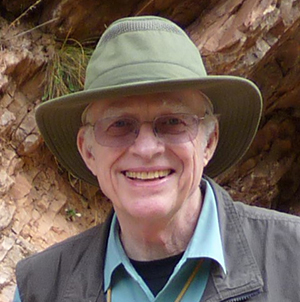 Walter Alvarez is Professor of the Graduate School in the Department of Earth and Planetary Sciences at University of California, Berkeley. He began his career as a structural geologist interested in plate tectonics, at that time a revolutionary development in geology. Structural work in the Italian Apennines, including recognition of solution cleavage, led to discovery of the record of magnetic reversal history in the Scaglia limestones at Gubbio. His group’s discovery in 1980 of the iridium anomaly at the K-T boundary at Gubbio and their hypothesis that the K-T extinction was due to a huge impact marked the end of strict uniformitarianism — the previously dominant paradigm which insisted that all Earth processes are slow and gradual — and paved the way for our current understanding of catastrophic events in Earth history and eventually led to discovery by others of the great buried impact crater at Chicxulub, beneath the Yucatán Peninsula. He is currently continuing long-term programs of studying mass extinctions, and both Mediterranean and global tectonics. He is also involved in developing Big History, the new approach that aims to tie the history of Cosmos, Earth, Life, and Humanity into a coherent understanding of the grand sweep and character of history