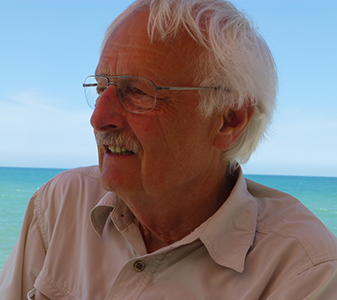 Born in Basel, Switzerland, 1936, Bernoulli received his Ph.D. in Geology from Basel University in 1963. He began his career as exploration geologist in the oil industry (1963–1967); after this he was teaching at Basel University, and from 1986 to 2000 Professor of Geology at the Swiss Federal Institute of Technology (ETH), Zürich. He has been a visiting professor at the Universities of Lausanne, Bologna, Parma and Perugia. Socio straniero dell’Accademia Nazionale dei Lincei 1994; Dr. h.c. sc. nat. University of Lausanne 2006; Medaglia Capellini, Società Geologica Italiana 2008.

Bernoulli’s early research interests were in Alpine geology, mainly the interaction of tectonic and sedimentary processes in the early evolution of mountain belts. Over the years his research expanded to the evolution of continental margins of ocean basins, partly in cooperation with the Deep Sea Drilling Program, comparing present-day continental margins and their sediments with ancient counterparts preserved in Mesozoic-Tertiary orogenic belts. More recent work deals with the sequence stratigraphy of carbonate platforms in the Apennines and relics of oceanic crust in the Alps.

More than 120 contributions in scientific journals and books