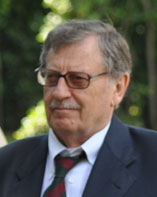 Raimondo Catalano, born in 1938, full professor of Geology since 1980 at the Palermo University, is now retired.
In the past he has been repeatedly charged as Chief of the Geological and Geophysical Dept., and as Chief of the CIRITA, a multidisciplinary environmental Dept. at Palermo University.
Prix Feltrinelli 2011, Accademia dei Lincei, for the Geological Sciences. Member of the Accademia dei Lincei.
Main research activities are : -Regional geology of central Mediterranean, e.g. Sicily mainland and offshore areas; crustal setting of Ionian Sea (CROP Project);
-Field geological survey and marine mapping;
-Geology of western Pacific Ocean guyots and Caribbean Sea margins;
-Coastal management of marine reserve and protected areas.
He has been often abroad in the United States (University of Princeton, Rice of Houston and Lamont Geological Obs.N.Y.) for studies(seismic reflection interpretation and marine geology) and researches, also taking part to oceanographic cruises in the Western Pacific Ocean and Caribean Sea.
By integrating field geological analysis with geophysical investigation, he has defined a comprehensive structural model for the Sicilian crustal Orogen together with a paleogeographic evolution model of Central Mediterranean since the Permian.
Copious the activity about submitting of scientific projects and conferences/ meetings organization, he has been in charge of numerous CARG Project geological sheets, located in Sicily and adjacent marine areas, as well as of several PRIN programmes(often as national coordinator ).
In more recent times he has leaded the multidisciplinary SI.RI.PRO. Project financed by MIUR. The nature and thickness of the crust and the depth/geometry of the Moho crust, under central Sicily, has been investigated by a 110 km deep crustal seismic reflection profile crossing, from North to South, the whole Sicily. The achieved results, already published, have improved the knowledge of African and Tyrrhenian– European lithospheres.
R. Catalano is still involved in geological researches in cooperation with national and international colleagues and the results have been recently published on peer reviewed journals.