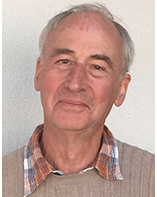 Hugh Jenkyns obtained his first degree (BSc) from the University of Southampton in 1966 and his PhD from the University of Leicester in 1970. Subsequently, he held post-doctoral fellowships at the University of Basel and the University of Oxford. He taught at the University of Cambridge (1972–1973) and the University of Durham (1973–1977) before returning to Oxford where he is currently Emeritus Professor of Stratigraphy. He has spent sabbatical periods at the Universities of Bologna, Ferrara and Milano, furthering his studies on the Mesozoic sedimentary rocks of the Alps, Marche–Umbria and Sicily. His early involvement with the Deep Sea Drilling Project, in the Pacific Ocean, led him into the study of ancient organic-rich sedimentary rocks that were deposited worldwide at various intervals of geological time during episodes of extreme climatic warmth. Based on this experience, he co-wrote the first paper, in 1976, on so-called 'Oceanic Anoxic Events': phenomena that have subsequently attracted considerable attention from organic and inorganic geochemists. He has medals from the Geological Society of London (Coke Medal), the Geological Society of Italy (Capellini Medal) and the Society for Sedimentary Geology (Pettijohn Medal) and awards from the Geological Society of America. He was elected a foreign member of the Istituto Lombardo Accademia di Scienze e Lettere in 2015 and a member of the Academia Europaea in 2018.