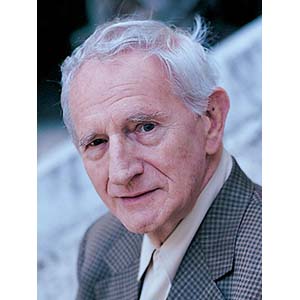 Institute Professor Michael Sela, a renowned immunologist who served as the sixth president of the Weizmann Institute of Science, passed away on May 27, 2022 at age 98. Sela is survived by his wife Sara, and three daughters.

Born in Poland in 1924, Sela arrived in Israel at age 17, after his family had first fled Poland and then Romania. In 1941 he enrolled in the Chemistry program at the Hebrew University of Jerusalem. After completing his MSc, he went to Geneva to conduct PhD studies, but several months later he moved to Italy where he helped European Holocaust survivors to go to Israel. When Israel’s independence was declared, Sela returned to Israel and joined the Weizmann Institute of Science where he became a student of Prof. Ephraim Katzir, who later became president of Israel. Katzir worked on poly-amino acids as synthetic models to facilitate the study of proteins. Sela received the PhD degree in protein chemistry from the Hebrew University for research undertaken at the Weizmann Institute; and in 1963 he was appointed professor.

In addition to his outstanding scientific achievements, Sela was a natural leader and a model for generations of students and scientists. The main scientific interest of Prof Sela was the elucidation of the chemical structure, the biological function and the mechanism of action of proteins. In 1961 he was co-author on the seminal paper on protein folding, recognized with the Nobel awarded in 1972 to Chris Anfinsen. Back at the Weizmann Institute Sela dedicated himself primarily to the study of the molecular basis of immunological phenomena and of the genetic control of immune response. He also turned to cancer research, with the idea of creating small molecules that would block the receptors on cancer cells. Prof. Sela made numerous discoveries that forever changed the face of immunological research worldwide. He published more than 800 articles, chapters and books in the fields of immunology, biochemistry and molecular biology.
He was most proud of his contribution to fundamental immunological control, leading to the development of new fields in immunology. He was particularly recognized in the scientific world for his research on synthetic antigens, molecules that provoke an immune response. Sela co-invented and held patents on two original drugs: Copaxone for the treatment of multiple sclerosis and Erbitux for treating cancer.

Prof. Sela served the Weizmann Institute of science in various important capacities: he founded the Department of Chemical Immunology and became its first Director. Later he was vice president and than president of the Weizmann Institute. Overseas appointments included a visiting scientist at the National Institutes of Health, the Massachusetts Institute of Technology, Harvard University, College de France and the Pasteur Institute. Also within the international scientific community, Sela achieved prominence, helped by being fluent in English, Polish, German, Russian, Romanian, French and Hebrew. He has been foreign member of the Max-Planck Institute for Immunology; served as vice chairman and chairman of the Basel Institute of Immunology. He was chairman of the Council of the European Molecular Biology Organization and later chaired the Scientific Advisory Committee of the newly-created European Molecular Biology Laboratory in Heidelberg. He was president of the International Union of Immunological Societies, and later served as president of the Scientific Council, Institut Pasteur – Weizmann Institute.

Sela’s scientific talent was recognized worldwide. He was elected member of important Academies including the Israel Academy of Sciences and Humanities, the National Academy of Sciences of the United States, the Pontifical Academy of Sciences, the Russian Academy of Sciences, the French Academy of Sciences, the American Philosophical Society and in 1995 he was elected honorary foreign member of the Accademia Nazionale dei Lincei. In that capacity prof Sela was very active and participated to important committees such as the International Feltrinelli Prize for Medicine more than once, and to the joint meeting on cancer immunology and allergic diseases held in Jerusalem in 2017 as a collaboration between the Israeli Academy of Science and Arts and the Accademia dei Lincei. Sela's numerous prizes and honors included the Israel Prize in the Natural Sciences; the Rothschild Prize in Chemistry; the Otto Warburg Medal; the Prize of the Institut de la Vie, France; the Albert Einstein Golden Medal of UNESCO; the Harnack Medal of the Max-Planck-Society. Sela and Ruth Arnon were also named the 1998 Wolf Prize Laureates in Medicine. Sela was awarded the Commander's Cross of the Order of Merit Award, Germany, and named an Officer of the Order of Legion of Honor, France.

Beside scientific research, Sela was committed to cultural activities: chairman of the Batsheva Dance Company’s Public Council served on the board of the first Arthur Rubinstein International Piano Master Competitions, the Rimon School of Music and the Jerusalem Academy of Music and Dance. Sela was also a founding member of the Yitzhak Rabin Center and a member of the Peres Center for Peace and Innovation. Scientific symposia were held at the Weizmann Institute on the occasion of his 80th and 90th birthdays. In 2019, the Michael Sela Auditorium was inaugurated at the Institute in his honour.