The seat of the Accademia Nazionale dei Lincei is in the Corsini Palace, located in Via della Lungara 10, in the heart of old Trastevere.  Opposite the Corsini Palace on Via della Lungara n. 230 is Villa Farnesina, the Academy’s representative centre.
In 1736 Cardinal Neri Corsini, of noble Florentine family, and nephew of Lorenzo Corsini (Pope Clement XII) purchased the Riario Palace – which had been the residence of the young Michelangelo and later Queen Christina of Sweden (a commemorative plaque is in one of the halls on the first floor of the Palace).
Cardinal Corsini had the palace altered and enlarged by the Florentine architect, Ferdinando Fuga. In his hands it turned into one of the most magnificent palaces of 18th century Rome and, from then on, became known as the Corsini Palace.
In 1883, 13 year after the Capture of Rome, the palace was purchased by the Italian government for 2,400,00 lire, provided it became the permanent home of the Royal Academy of Lincei and of the National Gallery of Ancient Art. The Corsini family returns to Florence.
That same year, Prince Tommaso Corsini donates to the Academy the magnificent family library. The outstanding collections of books, prints and pictures belonging to the Corsini family were arranged on the first floor of the palace. Together with the Corsinian archive, Price Tommaso Corsini presented to the Lincei Academy prints which, together with the collection later purchased by the Ministry of Education, form the National Collection of Prints. The Collection was housed on the second floor of the Palace, but then in later years was moved to Villa Farnesina. A collection of paintings which belonged to the Corsini family was also given to the Italian State by Tommaso Corsini. This formed the nucleus of the National Gallery of Antienne Art, which is now divided between the Barberini palace and the Corsini palace. 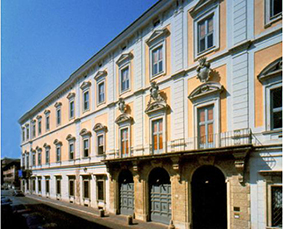 Although, the facade of the building on Via della Lungara has a uniform, monotonous appearance, the entrance provides a beautiful atrium with great pillars that give it a scenographic design. 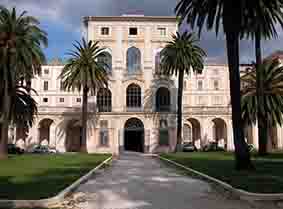 The rear facade of the Palace provides a livelier form. On the right side of the building the old Riario Palace is still visible. The panoramic view of the gardens, surrounded by gates decorated with vases originally provided an extensive view of the Janiculum before the establishment of the University Botanical Garden.

From the entrance hall of the Corsini palace, a wide staircase leads up to the first floor where the library of the Academy and the Gallery are situated. Through the open ceiling of the large vestibule we can see the second floor surrounded by a balcony adorned with a beautiful wrought iron railing
The second floor consists of a series of magnificent rooms, formerly the private apartment of the Corsini family. Today the activities of the Academy take place in these rooms, including the assembly meetings of the two academy classes, as well as meetings and conferences. From the entrance hall, one passes through the Sala Impero, Sala dei Divani, Alcove and the Tapestry room. Other impressive rooms on this floor are the Sala Rossa, Sala Gialla, Sala dell'Orologio, Sala Dutuit (where there are valuable collections of porcelain and other works of art, mainly from the Orient), the President's office, the Chancellor's office and the Secretariat