Villa Farnesina, considered one of the most magnificent creations of Italian Renaissance, was built for the rich Sienese banker, Agostino Chigi, in the early sixteenth century by Baldassarre Peruzzi, a Sienese architect of great renown. The interior is richly decorated with frescoes by great masters such as Raphael, Sebastiano del Piombo, Giovanni Antonio Bazzi, known as Sodoma, and Peruzzi himself. 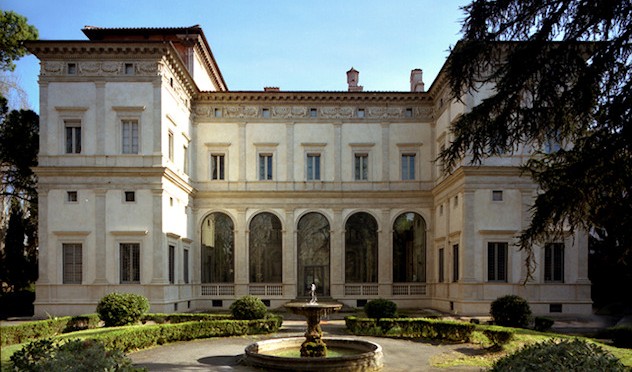 In 1511 the Villa, on the banks of the Tiber, in all its splendor of a magnificent “viridario” was completed. In this residence Agostino Chigi, also known as the “magnifico”, lived the splendid life of a renaissance merchant, in a setting of pomp and splendour, entertaining artists, poets, and noblemen with sumptuous banquets.
The most memorable was the banquet splendidly laid out in the stables, almost to show that Chigi’s stables were more fabulous than the halls of the Riario Palace that was being built on the other side of the street, or the one where gold and silver plates used for the banquet were flung into the Tiber as a sign of munificence; though the bankers ordered nets to be laid on the river bed so that the valuable objects could be recovered..
After such splendour during the life of Agostino, the villa, in which the Lansquenets set up bivouacs during the Sack of Rome and left their mark on the frescoes of the  first floor, at the end of the sixteenth century was purchased by Cardinal Alessandro Farnese and was named Villa Farnesina, to distinguish it from the Farnese Palace located on the other side of the river; according to a project by Michelangelo a bridge was to be built across the Tiber to connect the two Farnese estates.
The Villa later passed to the Bourbon family and subsequently a long-term lease of the villa was granted to the Duke of Ripetta. Finally, the Villa was purchased by the Italian State to seat the Academy of Italy. The Villa is now owned by the Accademia dei Lincei.

Today the entrance is from the rear side of the villa (the main entrance has two lateral risalits); what characterizes the construction and decoration is the close link between the villa and the gardens, as if each represented the ideal continuation of the other.

On the ground floor of the Villa an entrance hall leads to the Loggia of Cupid and Psyche (originally without the protective stained-glass windows), with the recently restored frescoes by Raphael and by his pupils. Amidst the wonderful festoons, the frescoes represent episodes in the story of Cupid and Psyche as told by Apuleius.

On the left of the Loggia of Psyche is the Room of the Frieze with a frieze that runs around the tops of the walls illustrating mythological scenes painted by Baldassarre Peruzzi (the labours of Hercules, the myth of Orpheus, Mercury with the heifers of Apollo, and the Rape of Europa. 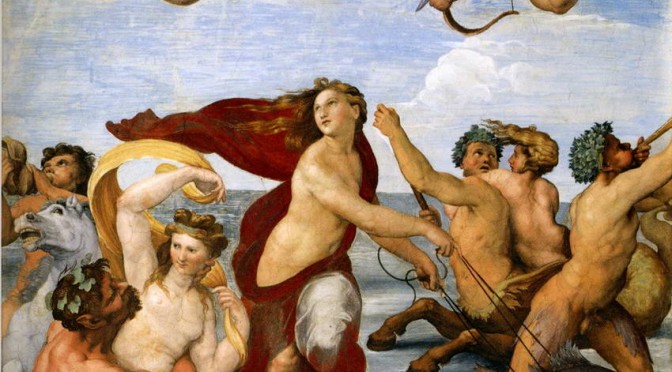 On the right is the Hall of Galatea, which contains Raphael’s famous fresco representing the Triumph of Galatea. The nymph, with delicate facial features, in contrast to her exuberant physical body, is shown amongst a throng of sea creatures as she is pulled in a shell-shaped chariot by dolphins. On the adjacent wall, Sebastiano del Piombo frescoed a large figure of Polyphemus, miserably in love with Galatea. It was originally a nude figure and later covered with a light blue drape. In subsequent epoch, the surrounding landscape was added and is attributed to Dughet.

On the first floor, the Hall of the Perspective Views, frescoed by Peruzzi, is one of the first pictorial creations that introduces the concept of linear perspective works of art. It represents ideally the continuance of the loggias on the ground floor: the imaginary loggia with a view of urban and rural landscapes under a bright sky and at a distance the urban setting with the Church of Santo Spirito, the roman Basilica and the Septimian Gate.
During recent restorations, an ancient "graffiti", in German gothic, came to light between the columns. It marks the passage of the Lansquenets and states: "1528 - why shouldn't I laugh: The Lansquenets have put the Pope to flight”. Beneath the ceiling runs a frieze with mythological scenes

Finally, a door leads to the bedroom of Agostino Chigi. The room was frescoed chiefly by Sodoma and depicts the life of Alessandro Magno (the family of Darius at the mercy of the great Macedonian; the wedding of Alexander and Roxane. On the wall adjacent to the left side of the door is the episode of Alexander the Great subduing Bucephalus. Mostly likely this last fresco is of a later date, given that originally Chigi’s bed was positioned against this wall.

Finally, a door leads to the bedroom of Agostino Chigi. The room was frescoed chiefly by Sodoma and depicts the life of Alessandro Magno (the family of Darius at the mercy of the great Macedonian; the wedding of Alexander and Roxane. On the wall adjacent to the left side of the door is the episode of Alexander the Great subduing Bucephalus. Mostly likely this last fresco is of a later date, given that originally Chigi’s bed was positioned against this wall:

Whoever enters here: what seems horrid to you is pleasant to me. If you like it, stay, if it bores you, go away; both are fine with me.