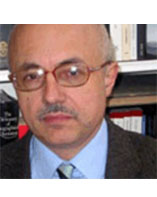 Roberto Scazzieri is Professor of Economic Analysis at the University of Bologna and Corresponding Fellow of the National Lincei Academy, Rome. He is a Senior Member of Gonville and Caius College, Cambridge and a Life Member of Clare Hall, Cambridge. He is a Senior Fellow of the Accademia delle Scienze di Bologna, a Corresponding Fellow of the Istituto Lombardo, a Senior Research Associate at the Centre for Financial History, Cambridge, and a Member of the Babbage Forum, Institute for Manufacturing, University of Cambridge. He has been Professor Attaché (Professore distaccato) at the Interdisciplinary Research Centre ‘Beniamino Segre’, National Lincei Academy (2012-2015). He has been the founding Scientific Director of the Institute of Advanced Study of the University of Bologna and a founding Managing Editor of the journal Structural Change and Economic Dynamics. His primary research interests are the economic theory of production and structural economic dynamics. He investigated foundational aspects of production theory focusing on patterns of connectivity and pioneering the development of production theory based on the structure of relationships between tasks and elementary processes. His current research explores the relationship between structural constraints and opportunities at the interface between the economic, the constitutional, and the political domains. His most recent publications in the field of political economy are Resources, Production and Structural Dynamics, edited in collaboration with Mauro Baranzini and Claudia Rotondi (Cambridge University Press, 2015), The Political Economy of the Eurozone (Cambridge University Press, 2017), edited in collaboration with Ivano Cardinale and D’Maris Coffman, and Palgrave Handbook of Political Economy (Palgrave Macmillan, 2018), edited in collaboration with Ivano Cardinale. He is currently working on the research monograph The Constitution of Political Economy, in collaboration with Adrian Pabst (Cambridge University Press, 2021).